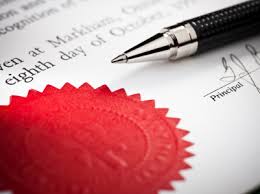 A history of the notary public sector in the United Kingdom

A notary public in the UK is now and has always been a qualified lawyer, tasked with authenticating documents and transactions for recognition by other jurisdictions.

Up until the eighteenth century, a notary public would notarise documents using their own highly personalised sign, and often these were very elaborate. At this time, governments and corporations were authenticating their transactions with a seal. Many Governments still use seals for particularly important transactions; however, companies rarely do in the modern age. Notaries gradually adopted seals to authenticate documents – after all, this was the usual way the validity of deeds was established in the courts.

By the nineteenth century, it was an established practice that any act carried out by a notary public should be attested by both the signature of the notary public, and their personal seal. Current practice is for notaries to have a highly distinctive seal, commonly illustrated with a professional or historical sign. Furthermore, notarial acts have been modernised. They are now created in standard forms so as to be easily recognised and understood in foreign jurisdictions. Formally notarised documents adhering to the standards of common notary public practice carry significant weight with courts and administrators in many foreign countries. As a result, the role of the notary public remains an important one and one which has evolved to best serve both citizens and Governments and courts.

South London Notaries are experienced in all aspects of notary public business. Please contact us for more information, or head here to find out more about the services we offer.

For a notary public in London, we provide a range of notarial services with flexible appointment times including weekends